Battle for the bottle

For the past couple of months I've been concerned that Bentley doesn't drink or eat enough food. Finally, after agonizing for long enough on my own, I decided to take him in to see the doctor. I made the mistake of mentioning the appointment beforehand to the little guy so he found some rocks in the yard to swallow, and stretched himself out on a stretching rack at night while I was sleeping... the doctor claims he is 21 1/2 lbs, and 30 3/4 inches. My home measurments had him at 20 1/2 lbs and 30 inches. They probably thought I was crazy when I insisted they check their measurements, but they did it. Bentley smiled, danced around like crazy to show them how much energy he has, and they told me he is doing just fine.

However - upon hearing that he still uses a bottle for milk, I was told to immediately discontinue this practice. So we came home, washed the bottles and boiled the nipples, and put them all away in a box in the garage. We're on day 4 of the new post bottle world, and it's not going well. He gets maybe 1/2 the amount of milk he had before, and today I think he had a total of 2 ounces. So, basically, I got the opposite result of what I intended from our trip to the Dr. Instead of getting more calories into the kid now I'm getting about 200 calories LESS a day. We'll give it another week, things can only get better (I hope)!

Other news:
Bentley is a HUGE fan of the outdoors. No matter the time of day, when he see's his coat or shoes he grabs them, goes to the door, and points outside. He cries when he has to come back inside, even if he's freezing!
We had a family picnic for Memorial Day, he enjoyed playing with cousin Felicity afterwards at our house. Bentley is a big food pusher, happy to feed her and other people as long as they don't try to feed him in return.
This past weekened I found a motorized little ride on scooter at a garage sale, and he loves it. I'm not sure if he knows that it moves on its own or if he's just into it for the noise the motor makes, but either way he is having a blast driving it all over upstairs. I predict he may want a bigger one when he's a little older... hmmm.... I still say no four wheeler or snow machine for my child though!
Posted by Kara at 10:48 PM No comments:

Bentley has learned a new word, and it's a great one to count among his first words - happy! Yesterday I heard him say it about 3 times, and then this morning he was wandering around muttering it over and over under his breath. For the unbelievers, in case there are any, I recorded it on video. I am particularly impressed that he chose this time to voice "happy" as yesterday night the poor kid woke up in the middle of the night with a case of croup. It's worse at night, when he has a horrible seal like bark and difficulty breathing. We're hoping it goes away soon - but - we're impressed with how happy he is despite it!
Posted by Kara at 12:39 PM No comments: 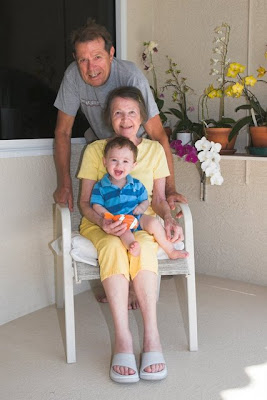 Last night Bentley arrived home from his big adventure in Florida. My parents took him down there so he could meet my Oma and Opa. He'd met all of his other great grandparents already, so I was very happy he had the chance to make this visit! Matt was also in Florida, partly overlapping Bentley's trip, for a conference in Tampa. Apparently the highlight of the trip (outside of meeting awesome relatives!) was the pool at Oma and Opa's house. From what I've heard, he really enjoyed it and would have spent all his time out there if allowed - maybe he's part fish?? :-)
On the plane and at the airport: 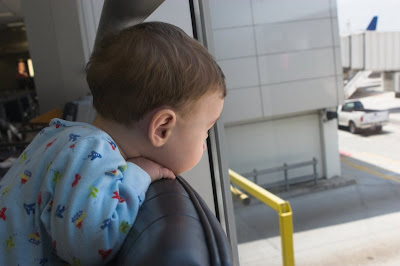 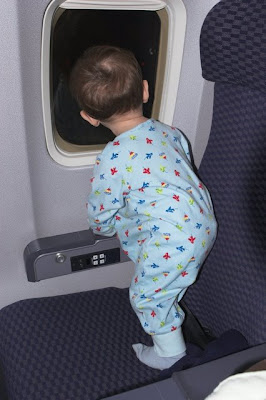 Adventures with the pool: Ready to go, in the water, and wanting to go back out... 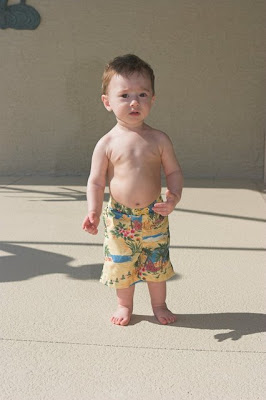 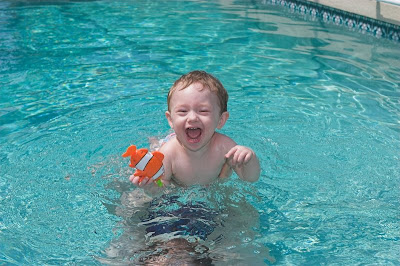 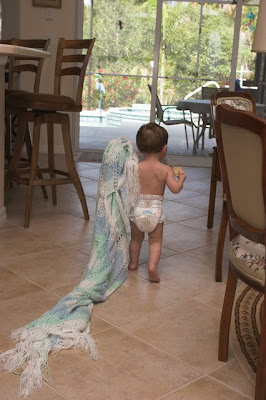 Enjoying the good life (big cookies!), and then kicking back: 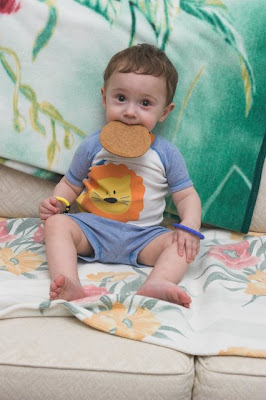 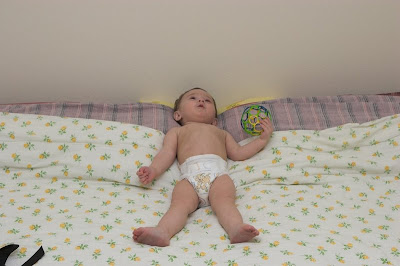