More Quotes from the Kids

Bentley, irritated with me as I try to enforce order at family prayer time:

Viva, excited to play with Rachel.  Rachel, has just gotten home and ran downstairs for a few minutes.

Jake, good with his bible stories (or at least one of them).

Today Viva was drawing on the iPad. She showed me her drawing (lots of loopy circles) and said. "This is a drawing of T-Rex. He eats plants and people." Technically, T-Rex didn't eat plants or people. He was a carnivore on the planet before humans walked the earth. Before I could save her drawing she X-ed it. When I complained, she said she'd draw me another one.

Here is the second drawing. It is "all the dinosaurs who lived with T-Rex." What dinosaur would live with a carnivore as vicious as T-Rex? 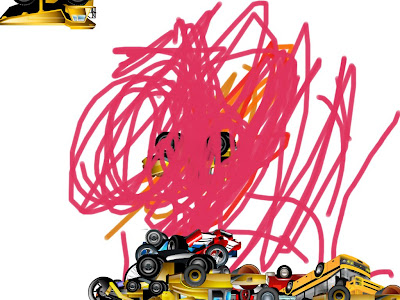 As you can see, there were a few construction vehicles added to the drawing. Can you tell this girl has two brothers?
Posted by julia (grandma) at 12:28 PM No comments:

Yesterday the family went to the fair. Jake, when getting dressed, carefully selected a shirt to wear. He chose a polo style shirt instead of his usual T-shirt. He then told me, "This shirt is good. Rachel will see me in it."

Have we mentioned that Rachel was visiting us last week? Rachel is Kara's cousin from Utah who comes up every summer and visits family and friends for a couple of weeks. This year she cut her time in Anchorage short so she could work at the State Fair. Jake knew we were going to see her while at the fair, so he wanted to make sure he was looking his best. Bentley also really likes Rachel. And Rachel has a boyfriend (Tanner) her age. She's very popular.

What do think, will Jake win Rachel away from Tanner? 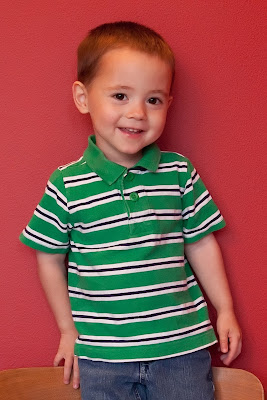 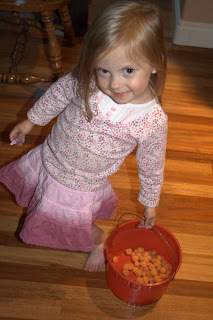 The kids are great berry pickers!  We have some raspberries around the house (and after getting some starts hope to have many more next year!) and the kids love to go out picking them.  Earlier in the summer it was strawberries with Daddy, but lately it's been raspberries.  Even better?  They all like eating raspberries too - even that Bentley child who is suspicious of most fruit.
They must be related to me.  I love raspberries - I have visions of turning the back yard hill into a huge raspberry field.  It would be lovely.  :-)
Posted by Kara at 11:11 PM No comments: 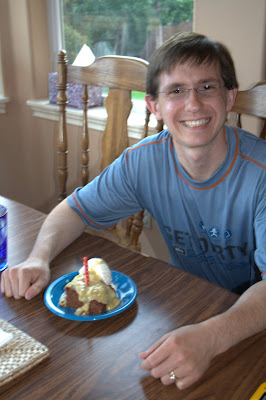 Matt turned THIRTY this year!  We had german chocolate cake to celebrate.  And some presents.  :-)  The kids are all about the presents!  Now that they're getting a bit older they want to know what they're buying, how many presents people are getting, etc...

Matt was lucky enough to have a Saturday birthday, so it was a nice day for relaxing.  The kids made him some lovely pictures for his birthday, and in the afternoon Matt & Bentley went to see a show downtown featuring life size dinosaurs.  We debated buying tickets for all of us, but figured Jake would have nightmares afterwards and Genevieve just wouldn't care!  So Matt & Bentley it was.  :-)

They had a great time, and came home raving about the cool effects.   We then spent the rest of the evening hanging out together!

Happy Birthday, Matt!  We're lucky to have you. 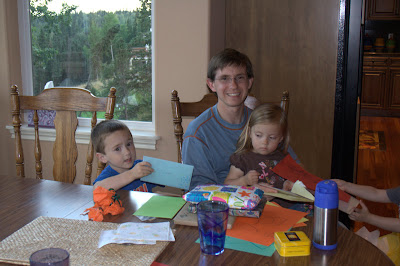 We were sitting at the dining table eating dinner, and Bentley was picking on Viva (unfortunately not the first time THAT has even happened!).

Rachel tried to console Genevieve with some wisdom: "I have older brothers too, Viva. It's a tough world out there".

Viva's response? "God made it"! 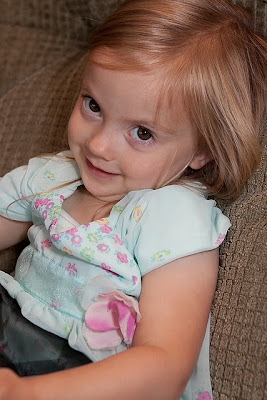 Summer in Alaska is particularly lovely because it's when visitors normally come to see us!

Last week we had Grandma Vicki here with us for a few short days, and we all had a great time.  The kids spend the entire first half of the week anticipating her arrival, and they spent the second half of the week overwhelming her with their constant attention and excitement.  :-)

There were pirate stories and activities, new sticker pages to color, campfires to build, Wii games to play, stories to read, games to play, building workshops to attend, and more.  There were bike and ball skills to show off, post card collections to admire, drawings to create, and play to be had.

Thanks for coming, Grandma Vicki!  We sure enjoyed our fun packed time with you!
Posted by Kara at 5:03 PM No comments:

The twins have been very chummy lately. I don’t why it is, but the past couple of weeks they have spent more time playing together and chatting together and just being twins. It's very cute and I wish you all could visit us and observe them together. You'd all want a pair of preschooler twins in your home!

At meal time they will sometimes share a chair and share food. (Other times they withhold food from each other.) Bentley has been gone the past few days (in Idaho, more on that in a future post) and the twins haven't seemed to miss him very much. They are too busy bonding. 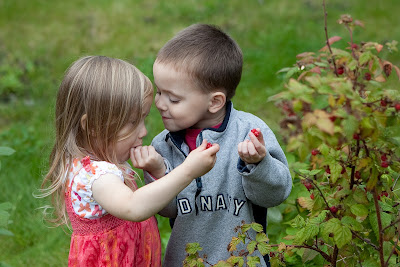 Earlier this summer we had a large load of dirt delivered to our property. We told the children to stay away from it, and they have, but this past Saturday we relaxed our policy and the twins took advantage of our good nature. At first they offered to scoop up the extra dirt near the pile and add it to the pile. That was good. But after a half hour or so, they moved half way up the dirt pile and started just playing in the dirt. 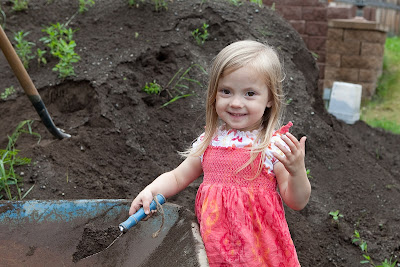 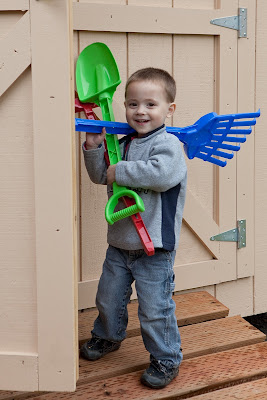 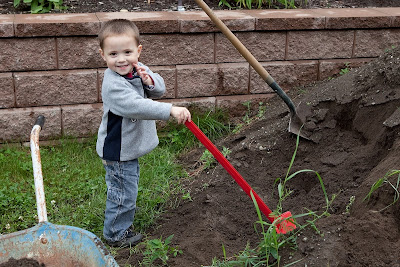 As we would expect, Viva got a lot dirtier than Jake and she stayed playing in the dirt a lot longer. Her jeans are pretty much ruined. However, she had a good time.

We coaxed them off the dirt pile (for a while) with an offer of raspberries. They love to pick and eat raspberries. 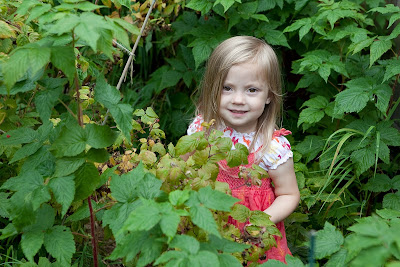 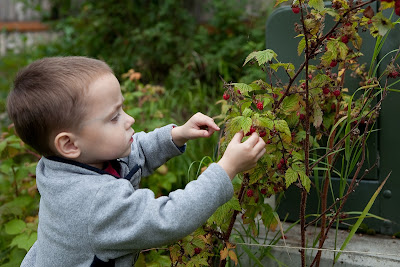 They had a good afternoon outside. We adults got a few perennials planted and a few wheelbarrows of dirt transferred to the back. There's a lot more work to do.
Posted by julia (grandma) at 12:19 AM No comments:

For over a year I have been gathering the props to take a photo of the twins in the style of Grant Wood's American Gothic portrait. 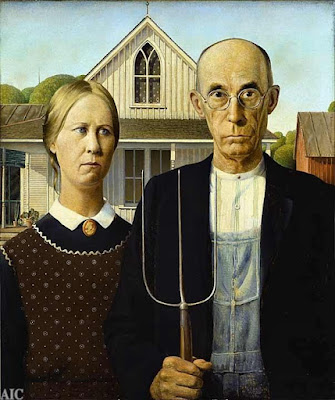 The hardest part was finding a child sized pitchfork. I tried getting one at Halloween time. I looked online for the props for a devil's costume and for Trident's pitchfork. I had no luck. Then this spring while I was wandering through the aisles at JoAnn's I found one! It was on the gardening aisle attached to a bird house. (The pitchfork was the end you stick in the ground!) I removed the birdhouse and had Mark cut a dowel down to the right length and finally I had my pitchfork.

The next item of business was finding the right costumes for the twins. Viva owns dozens of dresses, but none of them were staid enough. Then early this summer Kara purchased a size 4 (too large, but I used safety pins) brown corduroy dress. I put a size 2 (too small) dress with a white collar under the brown dress. Kara put Viva's hair in a pony tail and she was ready.

For Jake I had to purchase a pair of overalls. Again, they were too small, but it was only cheap pair in the used clothing store. To the overalls I added Bentley's (too large) suit jacket. The kids were decked out. Now for a good location to shoot.

Mark lined them up on our driveway with the neighbor's pitched roof behind them. It wasn't perfect (the twins are much shorter than the couple in American Gothic), but it worked all right.

Next I wanted to borrow the neighbor's lawn because he has a small Alaska log cabin (AKA cache) on the edge of his lawn. The only problem is he's a recluse and wouldn't answer his door when I knocked so I couldn't ask his permission. Mark didn't care about that technicality, he just stuck the twins in front of the cache and took some quick shots.

How did we get them to cooperate? I bribed them with a promise of box of fruit snacks each. Fruit snacks are a banned-by-mom food, so they will work hard to earn them. Jake was very easy to work with, but Viva was a bit of a trial. She kept bopping up and down and running off. 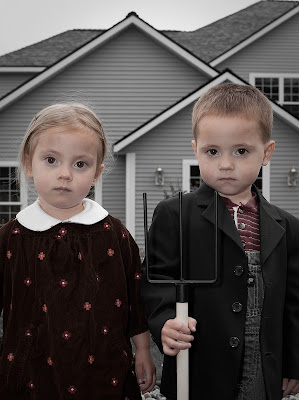 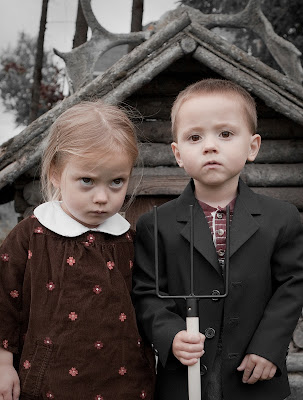 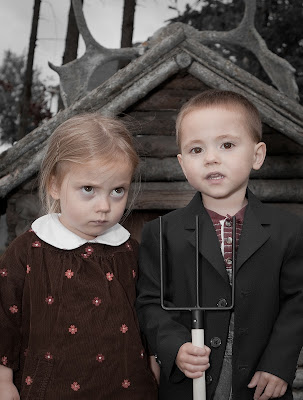 Did they do a good job? Remember they are only three years old! (I kept telling Viva to look grumpy--hence the VERY grumpy expression on her face.)
Posted by julia (grandma) at 11:50 PM 2 comments:

Where did all the dinosaurs go?

This is a question that has long stymied paleontologists. Today during sacrament meeting we were given insight into this mystery. Bentley made another of his awesome drawings and when we asked for the title of it, he told us "It's a stegosaurus turning into a butterfly." So there you have it--the dinosaurs morphed into butterflies. If caterpillars can do it, why not dinosaurs, too? I'll be contacting the Smithsonian this week to suggest that they investigate this most excellent theory. 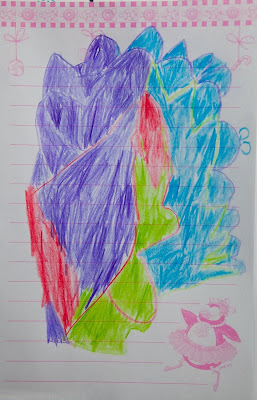 P.S. I've been trying to convince Bentley to trade out his current sketch book which has lined paper and tacky pink princess penguins in the lower right corner of every page. I bought him a Moleskine notebook with unlined pages, but he refused to use it. !?!
Posted by julia (grandma) at 3:54 PM No comments:

Three of our friends celebrated birthdays at the end of July/beginning of August!  We had a fun zoo adventure with Tallis, and some gorgeous weather for the adventure! 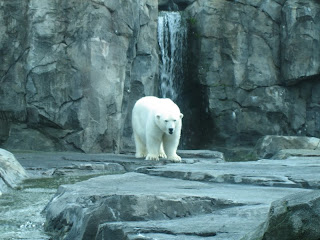 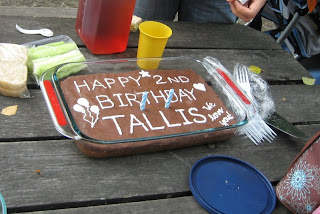 We also had a great time at the Bouncy House with Patrick & Cassidy.  The kids went crazy.  Bentley was a wild rock climber too, check it out: 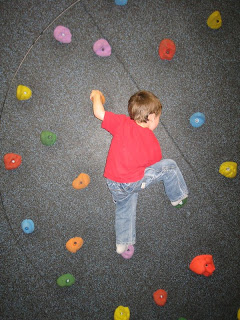 You can't really see it, but his hair is plastered to his head with sweat.  He was playing hard! 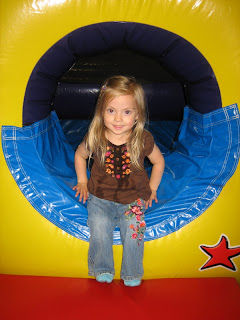 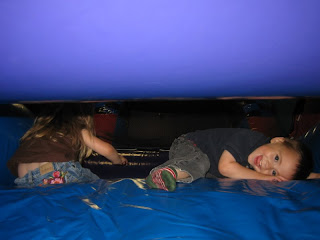 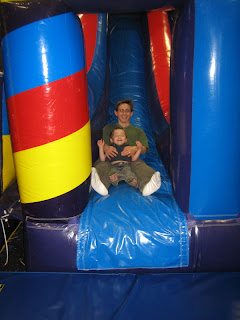 Thanks, friends!  We had fun celebrating your special days with you.
Posted by Kara at 6:13 PM No comments:

Kids on a Rock 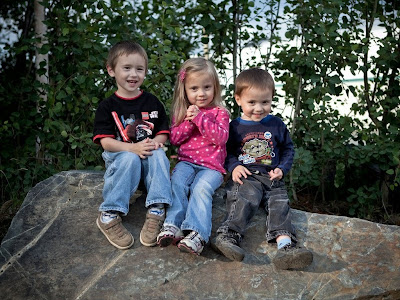 For some reason, most of our shots of all 3 kids have them perched on a rock.  Whatever works, right?!  We've had QUITE  a bit of rain this summer, but whenever the weather is halfway decent we try to get some time in outside!
Posted by Kara at 7:13 PM No comments:

This summer we went on a rather impromptu tour of the fire station!  Amrita was driving by it on a Tuesday, and thought: "we should take the kids there".   So she called, and the next day we showed up. 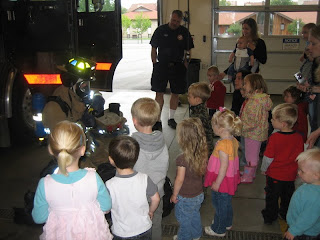 Apparently though, fire station tours aren't at the very top of the priority list at a fire station (go figure!).  The fire truck and crew at our fire station were out on a call!  So we (and 16 other small children we had gathered) waited and waited, and finally had a brilliant idea - we called another fire station and asked if we could come visit them instead!

We were all loaded out and turning back onto the road, when the fire truck returned.  Ah well, it goes like that.  We had moved on!

We had a great tour of a fire station.  We saw where the fire men sleep, where they work out, where they eat (4 fridges!), where they watch TV, how they get all dressed up to fight fires, and, of course, we saw the fire truck!  The fireman showed us all of the tools fire men have to break things to get to fires - and the kids were all quite impressed.

At the end of the tour a call came in, so we lined up all the kids along the wall and waved the firemen out to do their job.  Great tour, fun times! 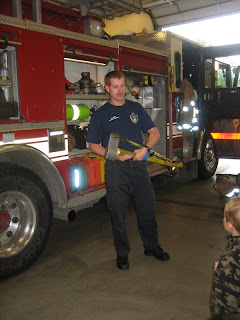 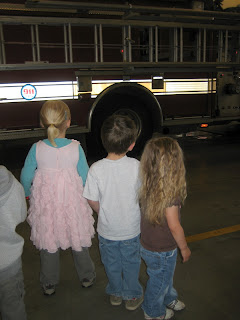 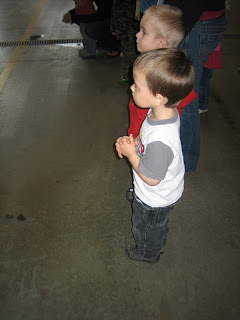